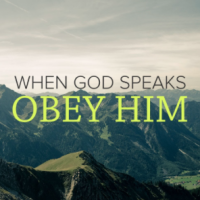 God is merciful and patient as exhibited in the story of Jonah. We can act like Jonah at times and what I mean by that is God can give us specific instructions, we refuse to do it and go off in a different direction only to end up doing what he said to do in the first place.

In Jonah 1:2 God told Jonah to go to Nineveh and tell the people to repent. But Jonah not being obedient to what God has called him to do makes the decision to flee to Tarshish Jonah1:3.

Jonah has entered a ship mind you, uninvited and now there is chaos on the ship and God had caused the wind to stir up the waters. Now those on the ship are asking Jonah what has he done and he explained he was fleeing from the Lord and this had caused the trouble to come up on them. They throw Jonah overboard and the sea calms immediately. At the same time a fish swallows up Jonah and he remains in the belly of the fish three days and three nights Jonah 1:5-17.

Our actions effect other people that have nothing to do with what we may be going through. If we would listen and do what the Lord tells us to do the first time it would save time and trouble for ourselves and the people around us.

In Chapter 2, Jonah prays while in the belly of the fish and God delivers him out of the belly of the fish. This is very familiar when we look at our own lives. We get into trouble then we want to pray for God to deliver us out of it and it didn’t have to go that way in the first place.

Chapter 3:2 God tells Jonah to go to Nineveh again. Ohhhh you bet Jonah goes this time. Jonah 3:3-4, Jonah tells the people of Nineveh to turn from their wicked ways or it will be overthrown.

Jonah didn’t think they would turn from their evil ways. This scripture comes to mind.…. For the wisdom of this world is foolishness with God, 1Cor. 3:19. We think we know so much and what’s right and we don’t. Trust God people.

Jonah was upset because God was patient and merciful with Nineveh and he knew God would give them a chance to turn their lives around. God asks Jonah was it right for him to be angry about this?

Jonah sat and waited to see what would happen to the city and while waiting it grew hot, so God grew a plant to give Jonah shade, but the next morning a worm ate some of the plant, now with limited shade and the unbearable sun beaming down on Jonah he wanted to die. God explained to him in Jonah 4:9-11, is it right for you to be angry about a plant dying that you didn’t do nothing to put there and he pretty much said yes angry even unto death. God said you felt sorry for a plant that only has a short period of time to live, so shouldn’t I feel sorry for a city living in spiritual darkness whose sin was going to lead them to death.

Jonah had more pity for a plant than the spiritual lives of people God was trying to save.

When God ask you to speak to 1 or 100 people don’t say it is a waste of time. God doesn’t think we are a waste of his time; he loves us and wants the best for us. Jeremiah 29:11 says, For I know the thoughts I think toward you, saith the Lord, thoughts of peace, and not of evil, to give you an expected end.

When God chooses you, GO and give the message. Fulfill your God given assignment. Some of us are for planting the seed, some water and God gets the increase. We can do it our way and take the long way around, but God’s will will be done.

A Call To Holy Living

A Call To Holy Living

-Reviews, Advice & News For All Things Tech and Gadget Related-

Recipes showing step by step directions with pictures and a printable recipe card.

AS GABRIEL CARES AND INSPIRES THE BELOVED!

A Guiding Light and Hope for God's Beloved! A place to be Encouraged and Inspired!

Into the Light Adventures

1 John 4:10 - This is real love--not that we loved God, but that he loved us and sent his Son as a sacrifice to take away our sins

where love, inspiration, and encouragement collide

Prime my subconscious, one hint at a time

Sharing the Gospel of Jesus Christ to the World!

Sharing the Lord's Message of Grace

Thinking about all the reasons we have for praising our LORD.